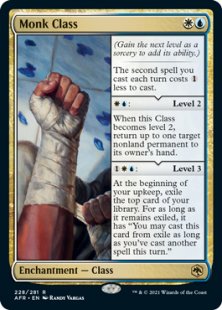 (Gain the next level as a sorcery to add its ability.)
The second spell you cast each turn costs less to cast.
: Level 2
When this Class becomes level 2, return up to one target nonland permanent to its owner's hand.
: Level 3
At the beginning of your upkeep, exile the top card of your library. For as long as it remains exiled, it has "You may cast this card from exile as long as you've cast another spell this turn."

Adventures in the Forgotten Realms
€ 0,50